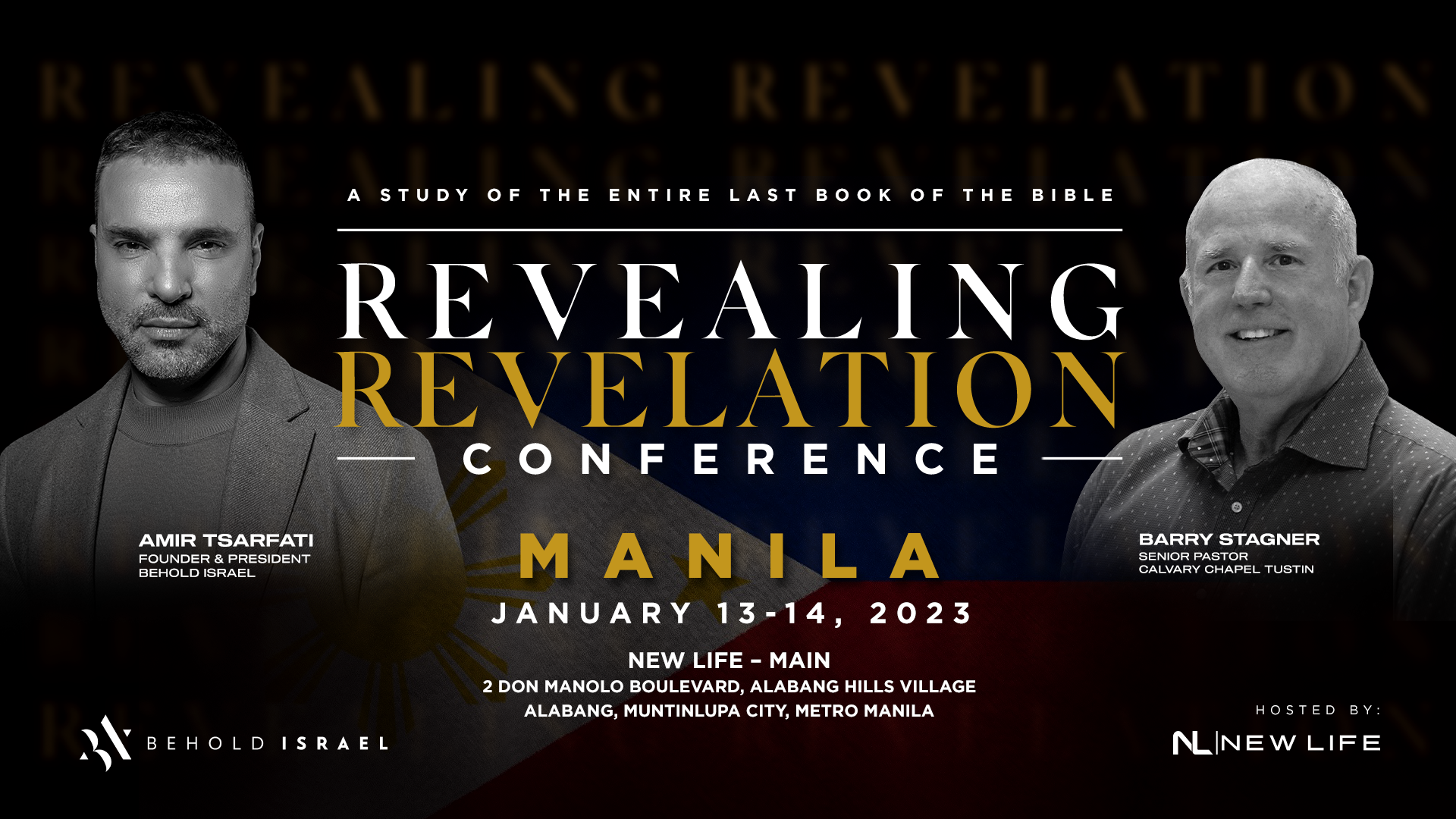 Amir Tsarfati was born to a Jewish family in Jerusalem, Israel. Amir served as the deputy governor of Jericho and was part of the unit that negotiated and coordinated with the Palestinians during the Israeli withdrawal from the city. Following his military service, Amir worked as a licensed tour guide for Sar El Tours and Conferences, and was eventually promoted to CEO.

In 2001, Amir founded Behold Israel while maintaining his career in tourism.  Behold Israel became a major provider of worldwide real-time access to reliable sources of news and information about Israel from within the powerful context of Bible history and prophecy. Over the years, his message has expanded from tour buses in Israel to large platforms around the globe, including conferences, church visitations, and an ever-growing online teaching ministry. He has also authored several books.

Amir is married to Miriam, and together they have four children.

Barry Stagner is the founding and Sr. Pastor of Calvary Chapel Tustin, Ca. Barry is also the host of the internationally broadcast weekly program, “The Line Up” and is the author of 4 books to date. Barry and Teri frequently speak at conferences and retreats addressing the topics of marriage, ministry or prophecy.

Barry and his wife Teri Stagner grew up and reside in Orange County, CA. and have been married since 1977. They have two children and four beautiful grandchildren.

Conference Proper: 9 AM to 5 PM

For inquiries, please email us at [email protected]

Registration fee is Php 600 per person.

WALK-IN REGISTRATION IS OPEN AT THE VENUE.

Begin your journey with Jesus.

Send us your prayer request.

You can attend our Sunday Services on-site or online.


CHORUS
HOLY HOLY IS THE LORD GOD ALMIGHTY
WORTHY WORTHY IS THE LAMB WHO OVERCOMES
GLORY, HONOR, POWER TO THE ONE
THE KING WHO WAS, WHO IS, AND IS TO COME


VERSE 2
JESUS CONQUERED DEATH, HE’S RISEN FROM THE GRAVE
OH ABUNDANT LIFE TO US HE FREELY GAVE
THE KING OF KINGS AND LORD OF LORDS, HE REIGNS
OH JESUS IS THE NAME ABOVE ALL NAMES

VERSE 3
IN THE MOMENT THAT WE HEAR THE TRUMPETS RING
EVERY EYE BEHOLD THE BEAUTY OF THE KING
WITH A JOYFUL SHOUT TO HIM THE CHURCH WILL SING
JESUS CHRIST, THE KING ABOVE ALL KINGS

CHORUS
I WILL GO WITH YOUR FLOW
PRESSING ON WITH MY EYES FIXED ON YOU
I SAY YES TO YOUR CALL
TO CROSS THE LINE, TO WIN THE PRIZE
THAT YOU HAVE SET FOR ME

BRIDGE
SHIFTING, MOVING
WE’RE ADVANCING
AS YOU LEAD US FORWARD

VERSE 3
NO MORE FEAR
NO MORE SHAME
NO LONGER BOUND
NO LONGER A SLAVE
JESUS, YOU HAVE WON IT ALL FOR ME

VERSE 2
JESUS YOU REIGN IN VICTORY
IN EVERY BATTLE, YOU HAVE WON IT ALL FOR ME
GREATER ARE YOU WHO IS IN ME
HEAVEN’S CHAMPION, YOU ARE MY SHIELD

BRIDGE
ALL OF MY HOPE AND MY TRUST I WILL PUT
IN THE ONE WHO IS ABLE, MY STRENGTH AND DEFENDER
ALL THOSE AGAINST HIM WILL STUMBLE AND FALL
I STAND IN YOUR VICTORY, JESUS MY SAVIOR

BRIDGE
THOUGH I WALK THROUGH THE DARKEST VALLEY
I WILL NOT FEAR FOR THE LORD IS WITH ME
THIS I KNOW, MY GOD IS FOR ME
HE’LL NEVER FAIL, HE’LL NEVER FAIL ME

CHORUS
I WILL SEE YOUR GOODNESS
OVER AND OVER AGAIN

BRIDGE 1
YOU ARE GOOD AND YOUR MERCY ENDURES FOREVER

CAPTAIN OF MY SOUL

CHORUS
JESUS HOLDS MY DESTINY AND HE’S CALLING ME
TO GO FURTHER THAN BEFORE BEYOND THE SHORE
I WILL TRUST WITH ALL I AM
THE ONE WHO HOLDS THE PLAN
WHERE YOU LEAD ME, I WILL GO
YOU’RE THE CAPTAIN OF MY SOUL

VERSE 1
YOU DO NOT DEMAND PERFECTION
JUST TO COME BE LOVED BY YOU
HERE’S MY ALL, NO HESITATION
JUST MY YES IS ALL IT TAKES
THERE’S NO FEAR, NO CONDEMNATION
ONLY KINDNESS, ONLY GRACE
JESUS, MY LIGHT AND SALVATION
YOU’RE DESERVING OF MY PRAISE

VERSE 2
HERE’S THE PART
WHERE MY LIFE CHANGES
YOUR MERCY HAS RENEWED MY DAYS
HEAR THE SONG OF THE FORGIVEN
NO MORE HIDING, NO MORE SHAME
NOW, HEAR THE ANTHEM OF REVIVAL
WE’RE DANCING TO THE SOUND OF GRACE
HERE’S THE PART WHERE SONS AND DAUGHTERS
NOW ARISE AND SING HIS PRAISE

BRIDGE
I WON’T FORGET HOW YOU SAVED ME
ON THE CROSS, YOU SET ME FREE
BECAME A MAN IN ALL YOUR GLORY
BROUGHT HEAVEN CLOSE TO ME

I WON’T FORGET HOW YOU SAVED ME
LOVED AND CALLED BY YOU
YOU ARE THE STRENGTH,
THE SONG INSIDE ME
THE PEACE WITHIN MY SOUL

LOOK UP
LOOK AROUND
NATIONS GATHER IN TO SEE

PRE-CHORUS
NOTHING WILL STOP OUR PRAISE
‘TIL ALL CREATION SINGS

VERSE 2
YOUR KINGDOM REIGNS
IT’S WITHOUT END
UNRIVALED KING, THE GREAT I AM

VERSE 2
HE IS HERE
WITH POWER, MIGHT AND GLORY
STRENGTHENING THE WEARY
HIS HAND UPHOLDING ME

WE WILL STAND
WE WILL SEE
HIS SALVATION DRAWING NEAR

GOD OF THE BREAKTHROUGH

PRE-CHORUS
I WILL NOT BE DEFEATED

VERSE 2
IN THE BATTLES AND THE STORMS
YOU’RE MY VICTORY
AS I PRAISE, I STAND AND SEE
THAT MY GOD FIGHTS FOR ME

CHORUS 2
KING OF GLORY ENTER IN

TO THE OTHER SIDE

VERSE 1
WHEN THE WINDS ARE HOWLING,
THE PRINCE OF PEACE IS MY FORTRESS
WHEN THE SEAS ARE ROARING,
WITH JUST ONE WORD, THEY’RE SILENCED

BRIDGE
WHERE YOU GO, I’LL GO
WHERE YOU’LL BE, I’LL BE THERE
WHERE YOU ARE, I’LL COME
RUNNING RUNNING AFTER YOU